PERFORMANCE BASED APPROACH (PBA) IN MALAYSIA – AN OVERVIEW

The Fire Engineering-Performance Based Approach (PBA) is a methodology for design, evaluation and assessment of fire safety in buildings. The design relies on the practice of fire engineering principles, calculations and appropriate software modelling tools to satisfy the intentions of the BS 7974:2019- Application of Fire Safety Engineering Principles to the Design of Buildings. Code of practice.

The PBA does NOT cover any ‘purpose group’ which are used for bulk storage or processing of flammable liquids, industrial chemicals or explosive materials. The intrinsic risk associated with such buildings will necessitate special consideration. In Malaysia, it is essential to comply with all the clauses stated in the prescriptive building code of Uniform Building By-Law (UBBL) 1984 (amendment 2012) and Sarawak Building Ordinance 1994 (amendment 2008), but it is permissible to adopt the PBA approach for noncompliance.

During architectural plan approval, the noncompliance allowed only for compartmentation and travel distance where the project’s development which exceeds 150 meters high, covering an area of more than one million square meters as well as mixed development where such purpose group are strenuous to comply with the common existing requirements of compartmentation and travel distance as stipulated in the following UBBL by-Law: –

“Maximum travel distances to exits and dead-end limits shall be specified in the Seventh Schedule of By-Laws. Limits, when the alternative is available for shops, are 45 meters (sprinklered building)”.

Performance Based Approach (PBA) in Malaysia

Performance Based Approach has been widely practised in Malaysia since 2003. Therefore, the PBA is applicable if the compartmentation and travel distance limits in the architectural plan exceed the seventh and ninth schedules. Can you imagine a big mall such as AEON, GIANT and TESCO for example with limited compartment? An airport building with a limited travel distance of 45 meters (unsprinklered) or 60 meters (sprinklered)? and so on for each of those limits, it must be unusual right? And don’t forget coupled with the uniqueness of various designs and the variety of functions of large buildings including skyscrapers now that clearly make it onerous to comply with the existing prescriptive building code.

The Fire and Rescue Department of Malaysia (FRDM) or known as BOMBA strongly encourages the compliance of the prescriptive building code, that is why only compartmentation and a travel distance of fire requirement are allowed as noncompliance and provide alternative means with PBA with an approach of smoke management system compliance with MS 1780: 2017 and AS / NZS 1668-1: 2015 standards.

In Australia and Germany for example, almost all compliance with the prescriptive building code can be replaced with the PBA, including the fire doors! This was witnessed by the author himself who had the opportunity to visit the facilities while attending the EU-sponsored Fire Safety in Nuclear Power Plant course back in 2013-2014.

Now, here comes the roles and responsibility of the Fire Safety Consultant to come out with the provision of engineered smoke management system through Computational Fluid Dynamics (CFD) or other similar software for modelling purpose together with evacuation study (egress).

The Fire Safety Consultant will need to substantiate that the proposed solution will fully meet the intent of the Fire Code using established fire safety engineering methodology in order to prove to the Authority Having Jurisdiction (AHJ), which is FRDM representatives that larger compartment area will not jeopardize critical life safety tenability criteria for anticipated fire loads at compartment area during fire conditions and therefore occupants have safe egress.

In general, the core principle of the PBA is the smoke management with proper evacuation where the consultants are expected to be very particular in considering the exact perimeters used to simulate the scenario. And it is extremely important in verifying the perimeter proposed accurately and precisely especially when it comes to simulation, calculation and documentation part.

In addition to CFD software for smoke modelling, the consultant also appertains other software whichever necessary such as SYLVIA, CFAST, LUMP PARAMETER and others while software for evacuation studies such as SIMULEX and PATHFINDER were also practised. Most importantly in this study is the compliance with smoke management standards based on MS 1780: 2017 and AS / NZS 1668-1: 2015, according to acceptance criteria. This includes the sprinkler system (MS1910:2017 and NFPA 13) which will be reviewed if necessary, including the Early Suppression Fast Response (ESFR) sprinkler application for the ‘atrium’ or large void area.

Do not get astounded if the previous approval following the prescriptive building code will be reviewed again as part of ‘cross-check’ evaluation by Fire Safety Officer of FRDM. This is because, only gazette (specific) area is allowed for PBA while the rest still compliance with the UBBL-by Law requirement previously.

Moreover, what we want to observe during the evaluation and testing on this PBA project is the visibility clearance exceeding 10 meters, smoke layer height 2.5 meters, radian heat of 60 degree Celsius, toxicity compliance and of course all smoke extraction systems function properly as well as smoke curtain, alarm and others. During verification, we can intercept or expropriate together with other active system testing such as tests on elevators, fire rated roller shutters and so on because the PBA activation is ‘zoning’ (selected coverage area) more or less like zoning concept of electrical isolation switch testing. This is important in ensuring that the PBA testing does perform well accordingly.

Hopefully, in the future, we could fully adopt performance code (pre-engineered) in line with the changes that take place so that the PBA evaluation and testing will meet the objective Code of Practice and indirectly protect our Malaysian firefighters/woman firefighter in the line of duty. 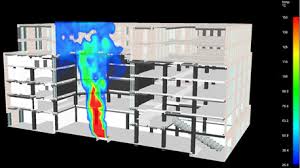 An example of CFD simulation for smoke travel, software and version could be varied. (source: youtube.com) An example of simulex/pathfinder simulation for egress of occupants in a building. (source: youtube.com)