Why We Need Fire Escape Stairs? WHY DO WE NEED ESCAPE STAIRS?

Usually, fire escape stairs are most often found on multiple-story residential buildings such as apartments and flats type of buildings. At one time, they were a very crucial aspect of fire safety for all new construction in urban areas.

Nowadays, they are commonly used as every kind of premises requires an emergency exit route.

The improved buildings codes nowadays include; fire detectors and technological advanced firefighting equipment which makes better communication between the occupants and the firefighting department that will come to the rescue.

A fire escape consists of several horizontal platforms, one at each story of a building with stairs and a ladder connecting to them.

But what does the fire escape stairs made of? The answer is; open steel gratings.

Every product that is made of open steel gratings is usually durable. During extreme weather in some other countries, the material avoids the build-up of ice, snow and leaves. It is very useful for the country that always has an unpredictable change in their weather.

Railings are provided on each of the levels of fire escape stairs as they are designed for emergency use only, these railings do not need to meet the same standards as others.

The fire escape ladder from the lowest level to the ground may be fixed, but commonly it swings down on a hinge or slides down along a track.

The simple movable designs allow occupants to safely reach for the ground during the fire emergency event but keep in mind that the route preventing people from accessing the fire escape route at certain times such as vandalism or burglary.

The fire escape exit from the interior of a building may be provided by a fire exit door, but in most cases, the only exit is through a window. Besides, the door is often fitted with a fire alarm to prevent other uses of the fire escape and to prevent unauthorized entry.

An alternate form of rapid-exit fire escape path has been developed in the early 1800s. It is also known as an escape chute. It was a long canvas tube suspended below a large funnel outside the window of a tall building. It was bulky to store inside the building.

A person escaping the fire would slide down the interior of the tube and could control the speed of descent by pushing outward on the tube walls by using his arms and legs. This escape tube could be rapidly deployed from a window and hung down to street level.

AITO Firework provides a fire safety consultant that will help you to provide solutions for your business.

Email us now to discuss how our fire safety consultants can assist you to follow the regulations to ensure your business is meeting its obligations.  WHATSAPP FOR MORE INQUIRY or call 03-7831 4791 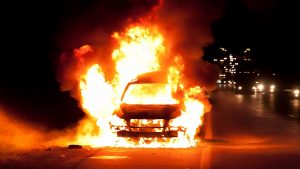