Your car on fire? Here are the reasons why 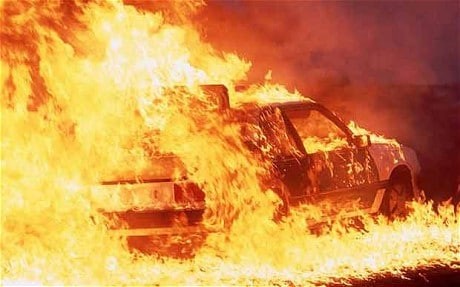 THE CAUSES OF CAR FIRE

If you see flames or smell smoke coming from your car while you’re driving, fret not, don’t panic! These are the sign of car fire which may happen to anyone. It’s unpredictable but can be prevented. To prevent this casualty, let’s learn the cause of this plight.

Most causes of car fires are rarely caused by a single catalyst but a combination caused by the incident. For instance, mechanical, chemical, and human causes. The causes of car fire all worked together and making the scene even worse. Vehicle fires contribute 20% of all reported fire cases so, it is worth knowing how to reduce some of the risks especially for your vehicle.

Here is the list of causes of car fire:

While it may be unlikely that the design flaw is one of the causes of a car fire on its own, it still can make conditions that lead to an uneventful fire and it is inevitable. Certain cars are prone to fire but not all. If the manufacturer cannot find the problem during the design process, this will be the first cause leading to ablaze.

Neglecting or forgetting to take care of your vehicle can increase the viciousness of fire. If you let broken parts, leaky seals, or faulty wiring without repairing, it will make your car more hospitable to the conditions of a fire.

Depending on the impact parts of the car, a car crash can even spark a fire and cause the car fire. Nowadays, many vehicles are designed with crumple zones that protect the crucial internal sites like a gas tank, engine, and a battery that is effective to prevent the car fire.

Exhaust systems can emit a lot of heat when they work too hard to burn off exhaust pollutants. Hence, this one of the hottest parts of cars. Even though the car is designed to withstand in a normal vehicle temperature, it cannot cope with temperature several hundred degrees higher; especially when you stay in a country with hot weather.

An engine that overheats is an implication of a car to catch on fire; an example of the causes of a car fire and how a problem can lead to one another. This is because the engine can overheat, which make the internal fluids – coolant and oil to rise and spill in the designated area of the circulation. When that happens, they drip and spurt throughout the engine bay and onto the exhaust system, causing them to ignite.

As mentioned, car fires do not happen that often, but they do happen because of the causes of car fires that I have listed. It is unpredictable! The important thing is, as your car blazed out, it is best to stay further from it. Do not panic and try to save your belongings. Anything could happen, including an explosion that may lead to death.

Just like the saying, prevention is better than cure. Hence, learn the causes of car fires and stay alert with your car conditions.

Fire Protection For Electrical Vehicle, The Facts You Should Know